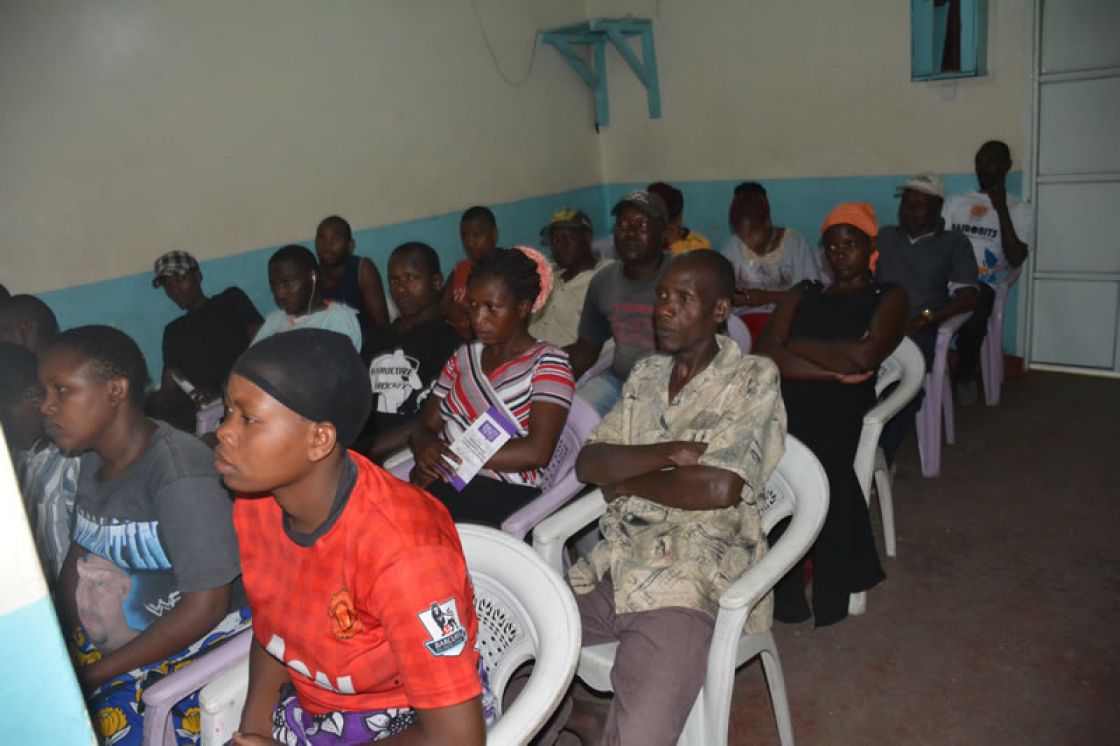 The forum was attended by 86 participants. Objectives of the forum were; to increase the level of engagement between the leaders and the community. To do issue (needs) assessment, to increase the knowledge of the community on the roles of different duty bearers and the functions of the two levels of governance and to discuss security situation within the ward.

He continued by saying that one of the contributing factors to insecurity was poverty and misconception of the Nyumba kumi initiative, Idleness of the youth, misuse of  community policing, provincial administration not involving the youth in any activities and communication breakdown between the community and the security agencies different political affiliations.

The community asked themselves hard questions that ended up not having answers. These questions were; why do they fight in the process of employing the leaders during elections? Why is it that always they as the youth were ready to be used by politicians to cause chaos? Why was there inequality in public offices when serving the youth compared to the elderly?

The community was quick to point out that to maintain security in any given area, two agents must be involved, the family and the government agencies. However the family plays a vital role in ensuring that security is maintained right from the homes by teaching their children good morals.

The community pointed out that there were people collecting Kenya shillings one hundred (100) monthly from each household and two (200) hundred from business community to offer security but in reality they are not offering it. This group calls itself “Nyuki”. Security is also volatile at the bridge connecting Mathare North and Huruma. From the hard questions which the community asked themselves, I would conclude that the community knows their responsibility but do contrary due to ignorance.

The community lamented that reports to the police stations are not treated with the confidentiality they deserve, something that forces the community not to report any incidence of crime. Some of the youth indulging in crime in the ward come from as far as Mwolem in Dandora which is outside this ward.

The community lamented further that they have never been involved in any public participation forums due to poor communication strategy from the ward office.

These community members identified various issues (needs) which they felt are affecting the ward and which need immediate intervention from leaders. Some of these issues are;

Responding to the concerns raised by the participants, the senior chief Mr. Paul Chandoek the chief retaliated that some youth groups have members from as far as Mowlem and their work is to collect money from the community without any work done. They are usually seated in one place with miraa. He said that the community policing in the area was a consensus by the landlords after discussing with his office. Due to youth idleness crime has started to rise again. The chief regretted that during recruitment to the forces, no youth from Mathare attempted to get in. Mathare has been labeled a hot spot due to some few individuals who have decided to cause chaos in the ward but the government will deal with them decisively.  The chief regretted that though he has helped many youth groups to register as either youth groups or community based organizations, they have never collected their certificates from his office and those with certificates have not been making use of them. He continued by advising the community that they should differentiate between the police and the chief since their functions are different.

In her part the inspector of police informed the community that security is the responsibility of everybody right from the leaders politicians included and community members. Solutions for security issues in Mathare ward lies purely with the Mathare community hence the community should not expect solutions from outside. The officer continued to say that nyumba kumi is active since the Muthaiga police station receives information from them. She said that the police know those who have guns in the ward.

The officer advised the community not to shy away from by giving vital information to the police. They should not fear for they (police) have been trained to keep any information confidential. But should they have any worry they should visit officers of higher ranks at Nyayo house or the office of the ombudsman.

Both the chief and the police officer applauded Sauti Yetu for organizing such a forum and requested the program to organize more forums in the ward.

From my observation more civic education and accountability forums are supposed to be planned in this ward since many community members are not aware of the existence of some offices and even the roles of the elected leaders.