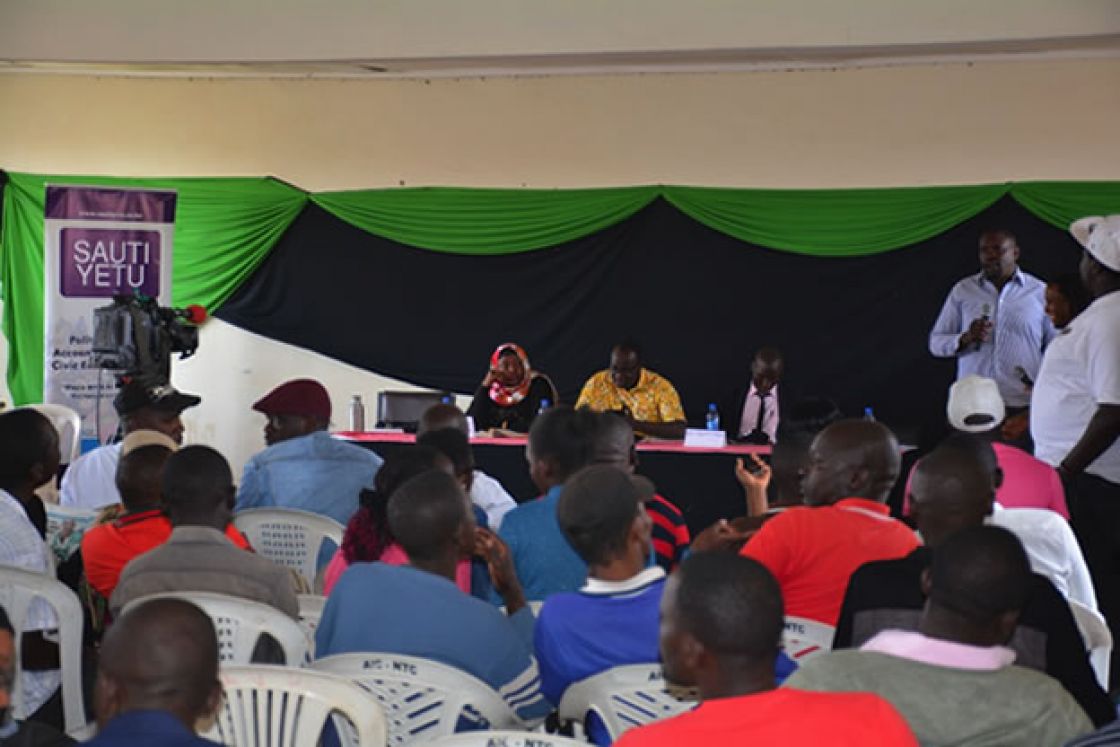 The Kibra Constituency political debate was in response to a request from one of the youth groups in Kibra; (Langata Youth Network). The group had sought Sauti Yetu to consider bringing together various aspirants on a common and levelled platform that will enable them engage each other on an issue-based perspective. The community group had been convinced that Kibra Constituency parliamentary seat had attracted many aspirants with many engaging in propaganda and personal attacks campaigns that would compromise election of a suitable candidate to represent the residents of Kibra.

Sauti Yetu heeded to this call and worked closely with the community group; Langata Youth Network to organize for the political debate in the Constituency.

The forum brought together residents of Kibra constituency; community groups; religious groups, individuals and prospective candidates for the Member of Parliament from different political parties in Kibra Constituency.

The event was attended by 160 participants and was facilitated by Mr. Tony Mboyo and Mr. Felix Odhiambo.

To provide a platform to the public that shifts political agenda from politician-led to community-led and give community members the opportunity to assess and ascertain the suitability of potential leaders to vie for public office;
To cultivate, shape and sustain issue-based electoral process that utilizes the principle of leadership and integrity as the supreme criteria of choosing potential leaders;
To increase and sustain productive engagement between the potential duty bearers and the right holders through public participation in a way that fosters responsiveness and responsibility.
In the preliminary sessions the moderator engaged both the aspirants and residents in understanding the roles and responsibilities of an elected Member of Parliament that will represent Kibra constituency after the general elections. This was followed by Setting of Ground Rules and Explanation of how the debate shall be conducted. The session that followed focused on presenting the cross-cutting developmental needs of Kibra Constituency as captured in the needs assessment forum preceding the political debate. Each aspirant was then given an opportunity to articulate their manifestos/agenda to the electorate in line with Kibra constituency’s pressing developmental needs. The subsequent session involved question and answers session that involved the residents vetting the suitability of each candidate through putting each of them to task to outline practical remedies to address different developmental challenges in the constituency.

A total of four (4) aspirants were brought on board for the political debate with the residents of Kibra Constituency. They included: Hon.Kenneth Okoth (current MP for Kibra, vying on an ODM Party ticket), Mr. Kassim Abdul (Jubilee Party), Malasen Hamida (Jubilee Party) and Suleiman Yusuf (ODM Party);

The residents of Kibra Constituency used the Sauti Yetu political debate platform to assess the suitability of each aspirants who intend represent them;

Unlike in other circumstances where incumbent leaders shy away from debates with the public for fear of being put to task to justify their development record, Sauti Yetu also managed to bring the incumbent Member of Parliament for Kibra Hon. Ken Okoth on board to respond to benchmark his development record against what he promised the residents in the previous election;

The Kibra Constituency political debate played a central role in cultivating and encouraging campaigns based key developmental issues affecting the residents of Kibra, marking a major shift from conventional campaigns that are characterized with personal attacks and propaganda;

With the upcoming elections presenting a litmus test for the aspirants and residents of Kibra to maintain peaceful coexistence during and after the elections; all aspirants in the political debate forum for Kibra committed themselves to hold peaceful campaigns;

The key priorities issues of concern from the residents of Kibra zeroed down to three major issues: (1) the need for an elaborate plan for slum upgrading that should focus on improvement of housing conditions and access to health care services; (3) A clear policy frame work that will address the employability of Persons Living with Disability in the constituency and (4) enhancement of access to education through construction and upgrading of ECD and Polytechnic facilities in at least each ward; in partnership with community based groups that have been trained and mentored, Sauti Yetu aims to advocate for prospective Member of Parliament to prioritize these issues in their development blue-prints for Kibra.