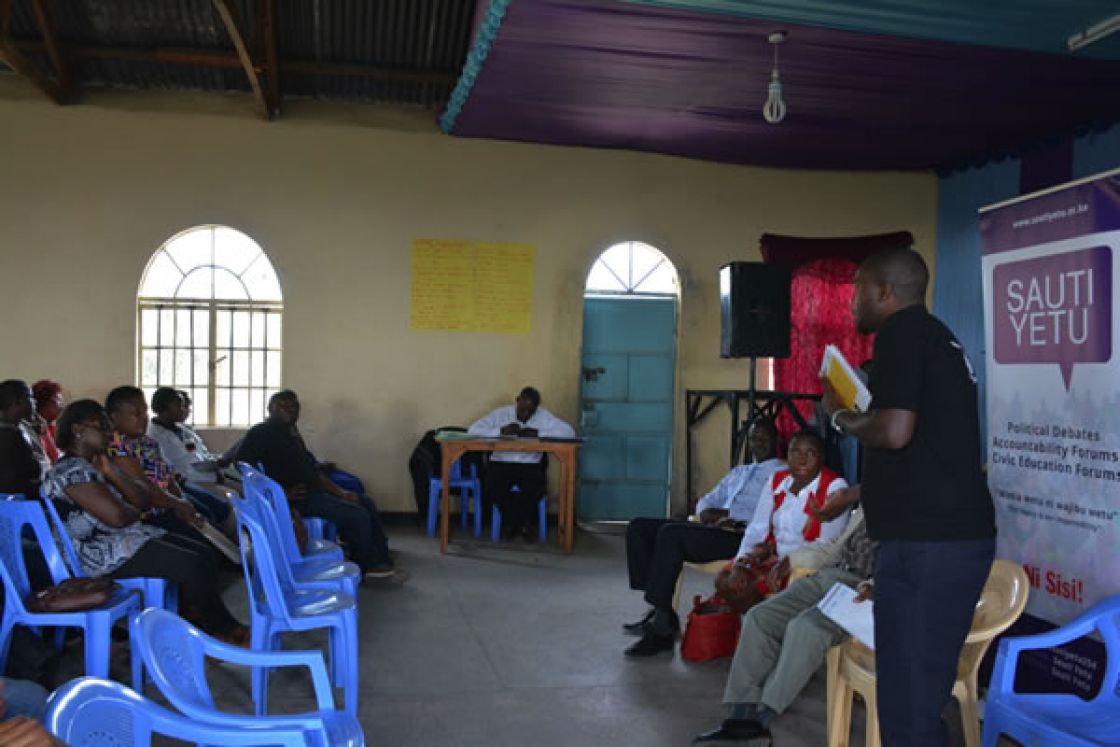 On 21st March, 2018 Sauti Yetu, together with community based organizations based in Rhonda ward, NAKURU County: Rhonda Residents Association, Topise Community base Organization and Mwaronda Company limited, organized for a Joint Community forum in Rhonda ward. The forum was held at Adassa Social hall. The duty bearers invited to this forum were: the ward administrator, the elected member of County Assembly, Rep from Nakuru Water and Sewage Company (Nawasco). The Joint Community Forum was attended by Hon. Timothy Kabutu Rhonda ward Member of Count Assembly, Caroline Gathura Ward Administrator and Mrs Zainabu Kimenje Rep from Nakuru Water and Sewage Company.The Joint Community Forum was attended by 83 participants including 36 Males and 47 Females.

Mrs Zainabu Kamenje used the platform to take the community through the issues concerning Nakuru Water and Sewage Company.

Caroline Gathura Rhonda ward administrator outlined the various sectors that County Government is working on, and then she invited Hon. Timothy Kabutu to respond to community concerns.

Key priority issues identified by the community and the duty bearers in the forum for follow up included:

On the issue of fencing the area around the sewage site in the ward, Mrs Zainabu requested the community to support the request with a formal request in writing to Nawasco to act on it.

Sanitation – to improve on sanitation Nawasco had a project of supporting Landlords with Nine thousand shillings to build a pit latrine toilet.

Nakuru water and Sewer Company is planning to build sewer around Rhonda Mwareki.

Hon. Timothy Kabutu Rhonda ward Member of County Assembly used sauti yetu platform to engage residents on key priority issues of the ward. He took the opportunity to invite youths for youth elections in the ward which was scheduled to take place on March 23rd 2018. He promised to work with them and appoint some in his development committee. He also invited Sauti yetu team officially to attend the election as observers of which we attended. Youths turned up in large numbers from 7 villages of Rhonda. The election was peaceful free and fair.

Residents of Rhonda Ward established a Community Action Committee that will work hand in hand with the duty bearers to track and follow up of resolution of concerns raised by the residents in the areas of above mentioned sectors and other emerging issues.